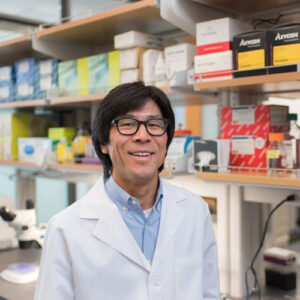 William Matsui is the deputy director of the Livestrong Cancer Institutes at Dell Medical School. He specializes in caring for patients with cancers that involve the blood and bone marrow as well as bone marrow transplantation.

Matsui came to Austin from the Johns Hopkins University School of Medicine, where he was a professor of oncology and served as the director of the Multiple Myeloma Program and the co-director of the Division of Hematologic Malignancies. Matsui received his undergraduate degree in biochemistry from Harvard College and his medical degree from the University of California at San Francisco. He completed his residency training in internal medicine at the University of Washington in Seattle and his clinical training in medical oncology at Johns Hopkins.

Matsui has carried out laboratory-based translational research throughout his career and focused on studying cancer stem cells, tumor cells with enhanced growth potential and their role in clinical oncology. His laboratory first identified cancer stem cells in the plasma cell malignancy multiple myeloma in 2003 and subsequently in other cancers including lymphomas, leukemias and pancreas cancer.